Watch the video to discover more

In my perfume tour in Florence I always include a guided tour of Santa Maria Novella Pharmacy, the oldest pharmacy in Europe, having been continuously active for over 4 centuries.

The Oldest Pharmacy in Europe

Its history begins as early as 1200 with the Dominican friars of the adjacent Basilica of Santa Maria Novella who dealt with the cultivation of plants for medicinal purposes, the distillation of plants and flowers and the production of balms, oils and ointments for personal use. 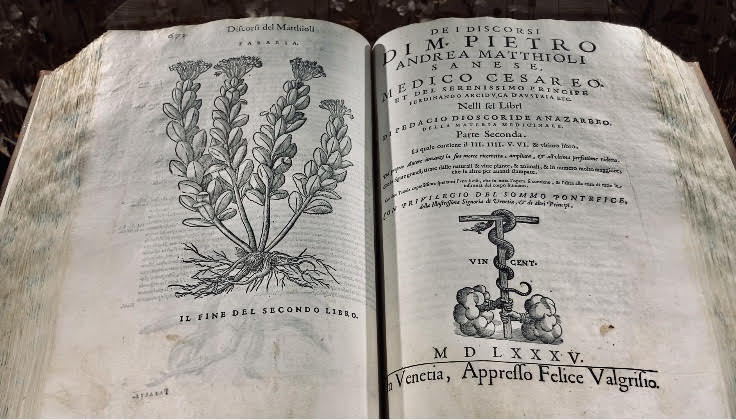 Gradually their products began to gain more and more fame and prestige until in 1612 the pharmacy officially opened its doors to the public and in 1659 obtained the recognition of Foundy of His Royal Highness by Grand Duke Ferdinand II de ‘Medici.

From then until today, Santa Maria Novella Pharmacy has never stopped producing perfumes, creams, soaps, oils and many other beauty care products, some of which still following the ancient processing techniques of the Dominican friars. (Here there is a list of all the collections on sale)

As soon as you cross the front door you will feel like you are really entering a magical world, surrounded by flowers of different colors and very special perfumes and scents. 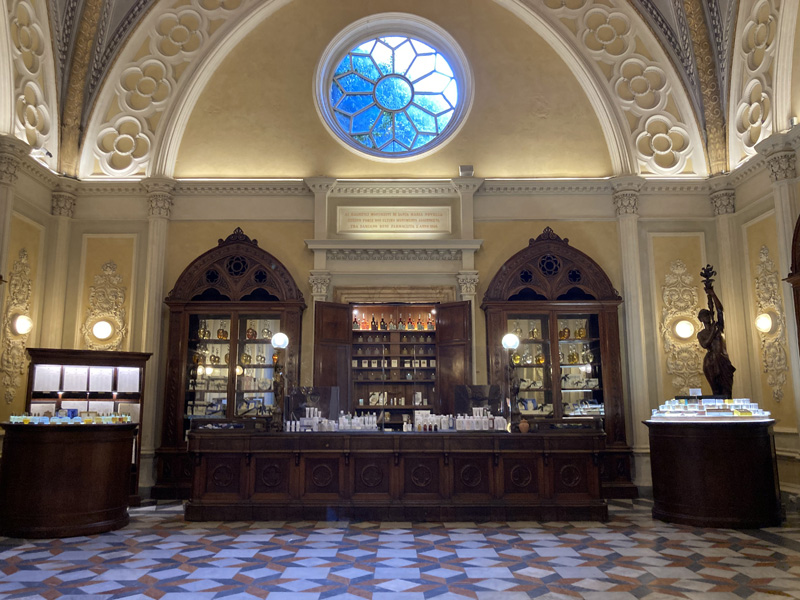 The first room we meet is the big sales room which was originally used as one of the chapels of the ancient convent. It was extensively renovated in the 19th century to accommodate the many customers who came from all over the world to visit Santa Maria Novella Pharmacy and furnished with splendid walnut wood cabinets, where the products are still stored today.

Acqua della Regina: the oldest and most famous perfume

Among the most important products there is Acqua della Regina, the perfume created by the Dominican friars in 1533 specifically for Caterina de’Medici and which she brought with her to France on the occasion of her marriage to King Henry of Valois. 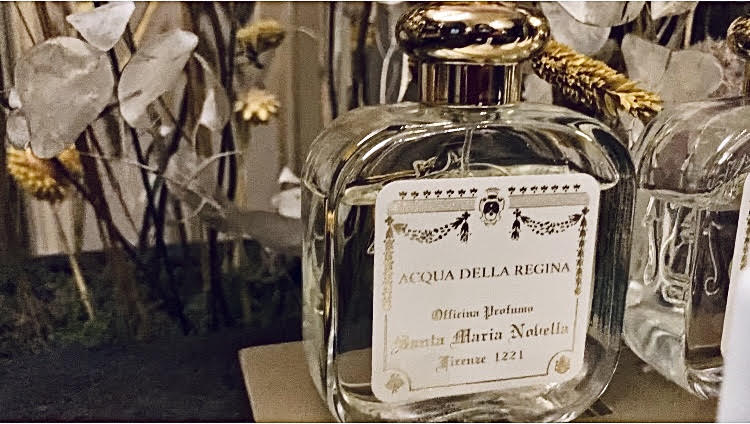 It was Cateria de’Medici who gave a great impetus to the art of perfumery in France, bringing with her her trusted perfumer Renato Bianco, who learned the techniques of making perfumes from the Dominican friars of Santa Maria Novella in Florence.

We now move to the green room, which was once used to welcome illustrious guests and serve them the liqueurs produced by the pharmacy or even a cup of hot chocolate according to the fashion of the time.

We are in a truly refined space, decorated with precious stuccoes and 18th century furniture and with portraits of all the directors of Santa Maria Novella Pharmacy hanging on the walls, as well as the coats of arms of the Dominican friars and the Medici family. 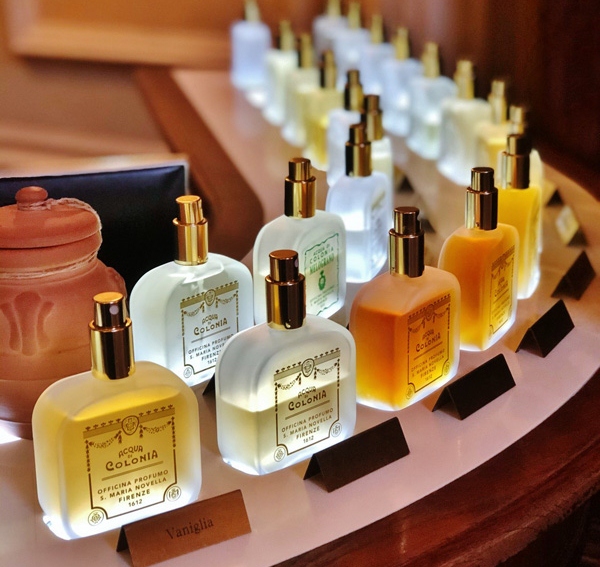 Among the most interesting products in this room there are certainly the room fragrances First of all the Armenian paper, an ancient natural deodorant that was discovered in the nineteenth century by a French doctor during a trip to Armenia. It’s made with paper treated and soaked in alcohol and a natural balsamic resin which, when it burns, does not make a flame but only a delicate and pleasant smoke that perfumes the environment and recalls the smells of Armenian homes.

Another very special object is the terracotta pomegranate. This is dipped in the pomegranate perfume, also produced by Santa Maria Novella pharmacy, and thanks to the porosity of the terracotta it preserves all the smells and fragrances that, once dry, are released into the room. 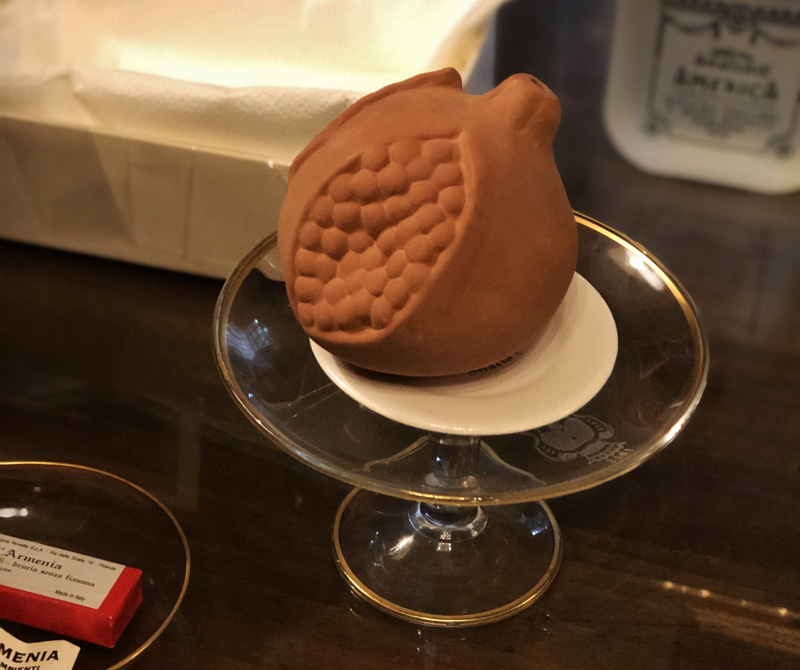 Last but not least the 5 room fragrances with the names of the continents. Each of these fragrances contains a mix of smells that characterize those countries allowing us to experience an olfactory journey around the world.

The last room was the old apothecary, originally used as entrance hall of the pharmacy and now transformed into a herbalist’s shop.

It is completely decorated with 18th century gilded stuccoes and with original 17th century furniture, inside which the various tools used for the preparation of perfumes and pharmacy products are kept, such as thermometers, ampoules, vases, scales and measuring cups.

Among the many products stored here, I was struck by the anti-hysterical pills and anti-hysterical water. They are a mixture of essential principles of aromatic plants, such as balsamite, cinnamon and mint and were used to treat what at the time was considered a uniquely female disease: the hysteria.

Due to their digestive, calming and refreshing properties, they were prescribed to women suffering from illness dictated by stress, depression and fatigue, thinking that they were pathologies born from a problem in the uterus.

Only in 900s with the birth of psychoanalysis the idea that hysteria was a disease and above all that it was linked only to the female sex was eliminated and the anti-hysterical pills and water were renamed only Santa Maria Novella pills and water and used as UNISEX relaxants!

Santa Maria Novella pharmacy has always been involved in the production of many liqueurs used both for medicinal purposes and as digestives. 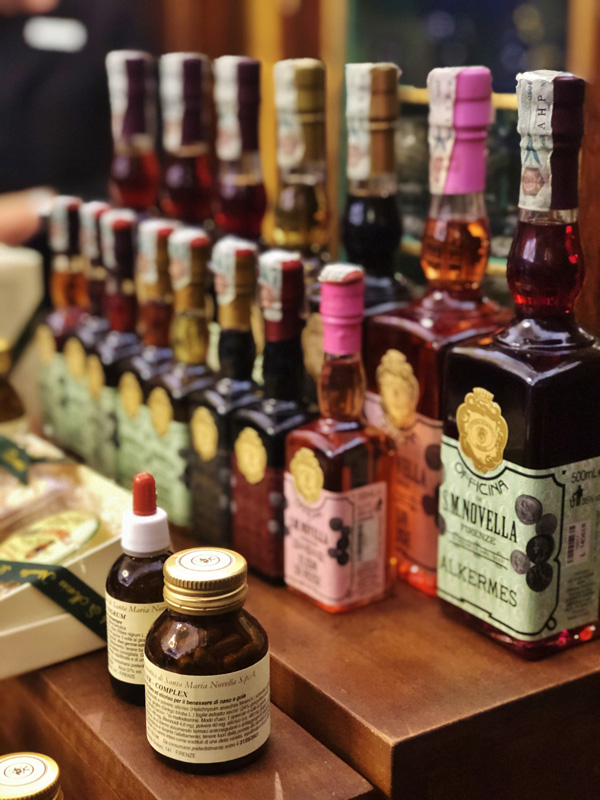 Among these we find the stomatal liqueur, to help digestion, the Medici liqueur, much loved by Lorenzo the Magnificent as an after meal liquor, the Alchermes, to prepare desserts including zuppa inglese, and the Elixir of China, which historically was used to cure fever and malaria.

Santa Maria Novella pharmacy has so many other wonderful products, with an ancient and interesting history that is really worth to be discovered.

It is definitely an unmissable stop if you are visiting Florence, not only if you are a perfume and body care products lover but also if you are interested in a luxury craftsmanship tour, to discover the best 100% made in Italy and Made in Florence products!