Discover with me its history, its customs and its typical foods, including the famous onion ice cream! Let’s go to Certaldo, a medieval village in Tuscany!

Today I take you to discover one of Tuscany most charming towns and also one of my favorite ones: the medieval village of Certaldo.

A guided tour through the streets of a charming Tuscany medieval town, Certaldo, where time seems to have stopped to the Middle Ages and where you can breathe a magical and full of tradition atmosphere.

It is an excellent destination for those who want to arrange a Tuscany tour , avoiding the most touristy places and preferring off the beaten paths. Among the many places to visit in Italy, Certaldo is certainly an unmissable stop and I often include it in my guided tour of Tuscany medieval villages.

Certaldo is a Tuscany’s hilltop town located right along the Via Francigena and in the past, thanks to its strategic position between Florence and Siena, played a very important role when these two enemy cities were fighting for the supremacy.

To get to the medieval village known as Certaldo Alto or Castello di Certaldo, you can park your car in Piazza Boccaccio in Certaldo Basso, the modern town, and go uphill by the funicular railway; in less than 2 minutes you will reach your destination and already during the journey, you will notice the great difference between the modern architecture of the town at the foot of the hill and the old medieval architecture of the town at the top.

As soon as you leave the cable car, you will feel like you have gone back in time: the entire village is made of red stone, the typical Tuscan terracotta, as it used to be already in the 12th Century and it is still surrounded by the ancient defensive walls.

Certaldo is very tiny but will make you speechless! Unlike most small towns in Tuscany, it does not have a main square but extends along a single larger street, Via Boccaccio, where all the main historical and cultural buildings are located.

Among Certaldo symbolic monuments there is Palazzo Pretorio, which was the Alberti counts first residence, an important family of Lombard origin who controlled this area for decades and then, when this medieval village passed under Florence supremacy, seat of the Florentine magistrates called Vicars. In fact, on the façade there are many terracotta coats of arms that belonged to the various vicars who lived and worked here, including the Medici family. 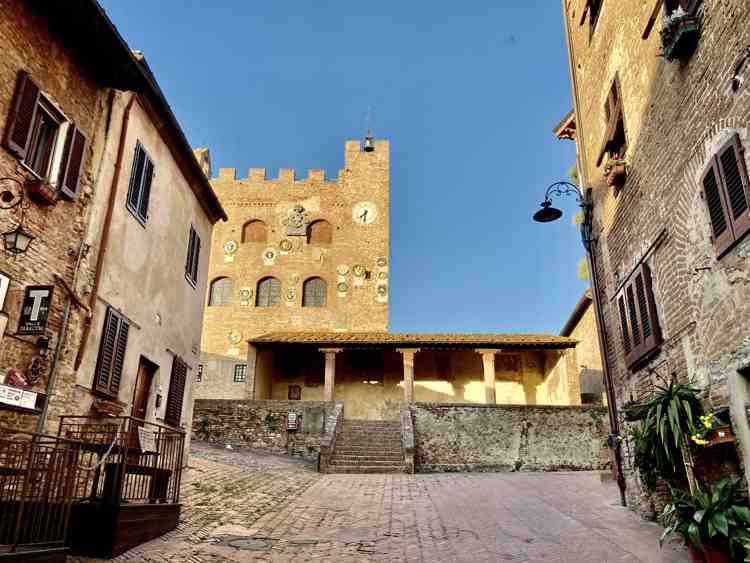 Boccaccio’s birthplace in the medieval village of Certaldo

Here it is also possible to visit the house of the famous Tuscan writer Boccaccio whose most famous work is the Decameron. This poem tells about a group of young people who took refuge in a villa outside Florence to escape the plague who tell each other sarcastic and amusing stories and represents one of the main works of Italian 1300s literature.

In the Decameron, Boccaccio mentions another thing for which this medieval town is noteworthy: the red onion! Boccaccio writes that “that land produces famous onions throughout Tuscany” and calls the protagonist of the novel “Frate Cipolla” (Friar “Onion”) paying homage to Certaldo most typical product.

In fact, the Certaldo onion has been cultivated here since Middle Ages and became the symbol of the city, so much so that the inhabitants of the town are also called “Cipolloni” (Big Onions).

This type of onion has such a particular flavor, strong and sweet at the same time that it can be used in different recipes, including one we would never expect: ONION GELATO!

Clearly, I couldn’t resist, and I tasted the onion gelato from a small gelato shop along the main street, Gelateria Crema e Cioccolato, and I must say that even if the flavor is very particular I really liked it. 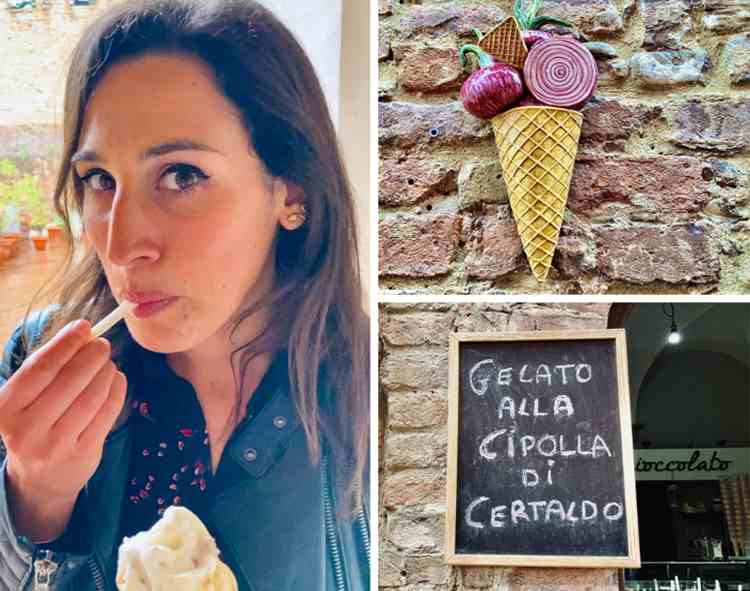 In addition to historic buildings and good food, many events, historical re-enactments and popular festivals are organized here in the summer, the most important of all is Mercantia. It is a very famous festival in Certaldo held every July where artists, actors and dancers perform in every corner of the town, creating a truly exciting and magical show.

Walking through its small streets, almost completely empty in these months, and breathing so much tradition and antiquity makes me feel truly blessed to live in such a rich and fascinating region.

I look forward to seeing you in Italy to guide you through this magnificent region, visit together the best towns in Tuscany and taste its gastronomic delights! Click here and discover my itineraries and Tuscany tours.

Certaldo, where to eat: